About the size of a small dog, around 2.5 feet long, opossums (commonly known as possums) are found across South and Central America up into New England and Canada. They are North America’s only marsupial. However, opossums have wiry hair and naked ears, tail, and feet, which leaves them defenseless against the bitter North American winters. Even so, they are capable of storing fat under their skin and in their tail to stay warm. 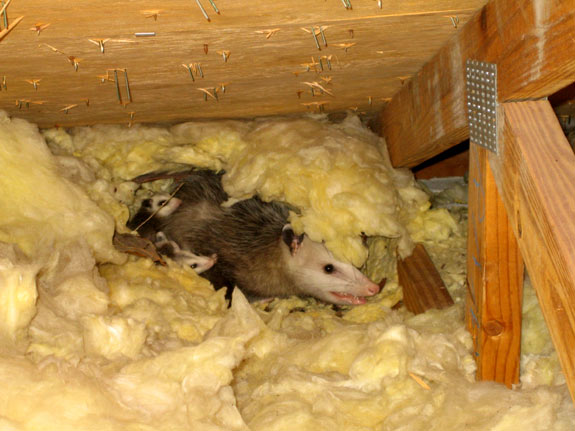 Because of lack of fat insulation, winter is a difficult time for opossums. The cold can disrupt their sleeping, nesting, and eating habits. For protection they will nest in dry dens stuffed with leaves and grasses to insulate the bedded areas. During the summer, possums will commonly split their time between different dens. Once the chill of winter sets in, they will instead stay closer to one, or just a few dens, for protection from the weather. These dens could be located in hollow logs or trees, burrows, woodpiles, attics, sheds, crawl spaces, or any other type of enclosed shelter that is dark, protected, and dry.

Unlike some animals, possums do not hibernate in the winter. They still need to leave the safety of their dens to explore their surroundings for food. They are solitary creatures and prefer to find food and dens on their own.

During the winter, opossums will eat whatever nourishment they can find. They are opportunistic omnivores. Their diet normally consists of insects, small animals, cat or dog food, nuts and berries, and anything else they can find in open garbage cans. This could include small animals such as snakes, snails, slugs, frogs, birds, and carrion.

As opossums wander through the chill of the night, they are susceptible to frostbite, but foraging is necessary as they don’t store food in their dens or collect excess fat in their bodies. If food is particularly sparse due to the severity of the winter, possums will leave their dens during the day in search of food. Because winters can be so harsh on these animals, most don’t live much longer than two years in cold climates. They can live longer in the warmer climates of the southern United States and Central America.

When are They Active?

Possums are naturally nocturnal animals. They wake shortly after the sun sets and stay out looking for food throughout the night. Foraging for food is usually done within a reasonable distance of the den, as opossums will usually return to the same one in the winter. However, they have been known to roam up to two miles from their dens in search of food. During the summer, possums can have fifteen or more dens they rotate through.