The opossum is a curious creature. With its long snout, big teeth, bare tail, and furry appearance, it certainly cuts a striking figure when spotted in the wild. Opossums are marsupials, which means they have pouches for their young to grow and develop in. They can be found throughout the Americas with a variety of different subspecies, although the most well-known is the Virginia opossum, which can be found throughout Canada, North America, and Central America. Whilst it is often referred to as a possum, it shouldn’t be confused with its actual possum cousin that lives in Australia and New Zealand.

These marvelous marsupials are opportunistic scavengers and have the amazing ability to adapt to a growing number of situations. So, whilst they are most at home in wooded areas, especially as they are fantastic tree climbers, they are also able to make themselves at home in human-inhabited areas. In these areas, they will help themselves to garbage, dumpsters, and roadkill, but they would be just as happy chowing down on a range of nuts, grasses, fruit, mice, birds, insects, and other small creatures – they aren’t fussy. 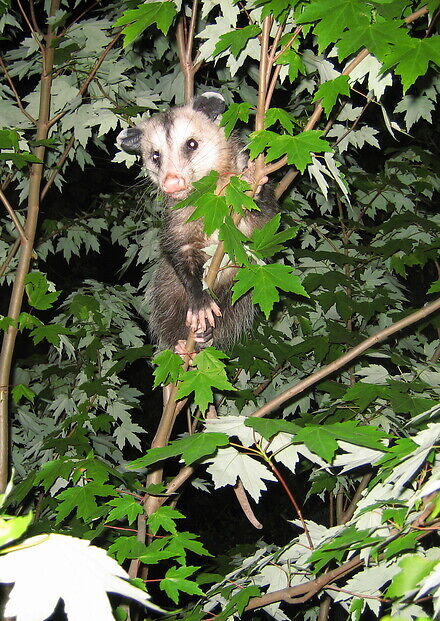 Opossums have a few natural predators; larger mammals such as bobcats, foxes, and coyotes pose a significant threat to the opossum, as do feral cats and also household pets such as dogs and cats – especially if the opossum is making nightly visits to backyards. They may also find themselves falling prey to large raptors and owls such as the great horned owl.

According to an article from Sciencing, opossums are thought to have a peptide present within their blood makeup that can neutralize snake venom. This gives them a fantastic defense mechanism against attacks from snakes such as the western diamondback rattlesnake.

As well as the ability to neutralize snake venom, opossums have a few other defense mechanisms up their sleeves, which help them to evade predation from the above list of predators. The fact that they have such big teeth and claws, combined with an array of growling and hissing vocalizations, gives them the upper hand against a whole host of predators – discouraging them from attacking. They are also quite large in size, reaching up to 2.5 feet long, so they can certainly seem threatening and not always worth the bother.

The opossum’s best-known defense strategy, however, is its ability to play dead. When threatened, especially by larger mammals – foxes, coyotes, and bobcats – the opossum will fall to the floor, extend its tongue, and stare off into space as though it were dead. Saliva forms around its mouth, and its anal glands will release a foul-smelling secretion. This whole display makes it appear a lot less appetizing due to its corpse-like appearance, and the predator will usually head off in search of something tastier. This “dead spell” can last anywhere from a few minutes to a few hours before the opossum comes back around and carries on its possum business.

Due to these pretty impressive survival tactics, adult possums are predated upon much less than young possums. Once the young have developed in the mother’s pouch, they will climb out onto the mother’s back and cling to her fur. Their small size (roughly the size of a rat) and their tendency to fall off the mother makes them susceptible to predation and make them a tasty snack for eagles, raptors such as falcons and hawks, owls, snakes, and all animals that make their homes in the same arboreal areas possums live. Just like their parents, they are also susceptible to attacks from dogs and cats kept as household pets, as well as feral cats. It’s unlikely that all of a brood will survive and reach adulthood.

One predator that poses the largest threat to opossums is man. They are often viewed as a pest species, nest under houses, and strew trash and litter all over yards in search of a tasty treat. Humans often seek to eradicate them from their homes and the surrounding areas. It is more likely that possums will be hunted by man, trapped, or poisoned than predated on by another wild animal. Their predilection for feasting on roadkill also brings them into close contact with another of man’s creations – the car. Time spent on or around roads means that the possum is also liable to succumb to a gruesome end.

So, whilst the opossum has a wide range of natural predators, from man to bobcats, eagles, and owls it also has a fantastic arsenal of defensive tactics that it can call upon to help it survive, whether that is its frightful appearance or its impressive ability to play dead.