Getting Rid of Opossums Humanely

Opossums – commonly referred to as possums in the US – are actually different from possums. Possums are closely related to kangaroos and indigenous to Australia, while opossums are the only marsupials found in North America. They originated in South America, and were later introduced to North America during the Great American Exchange. Opossums are about the size of a large house cat ranging in size from about 4 – 30 pounds and can grow up to 15 – 20 inches in length. Notable features of opossums include a grayish-brown fur coat, long pointy snouts, hairless ears, and round dark eyes. In this article, we are going to discuss five effective tips for getting rid of opossums humanely. 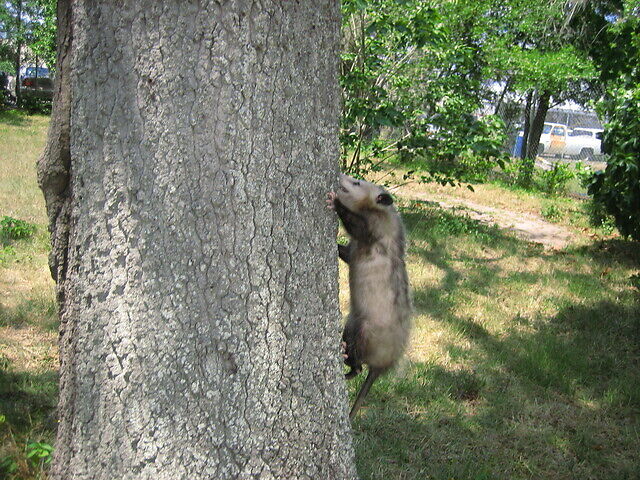 In order to understand how to effectively get rid of opossums, we must first understand their habits and characteristics.

Opossums are typically nocturnal creatures and tend to be much more active at night than during the day. Although nocturnal, they do not hibernate during the winter season, but they are less active during that time of year.

Opossums tend to live alone in solitude, especially when they are not breeding.

Because they do not build their own dens, opossums often find shelter in abandoned spaces like attics, woodpiles, basements, tree logs, other animal burrows, and man-made shelters.

Opossums are natural scavengers and often raid garbage cans, dumpsters, open foods, and other accessible canisters. They can often be spotted near roadkill feeding off other dead animals’ flesh. Opossums are also hunters of mice, chicken, snakes, and other smaller animals like worms and insects.

When threatened, opossums will often hiss, showing their sharp teeth in the hopes to deter a predator. If that doesn’t work, they go into a natural defense mechanism in which they pretend to be dead, falling to their side, curling up, and foaming at the mouth with their tongues sticking out. This is often referred to as “playing possum”. Opossums are typically harmless, unless they feel attacked, which might cause them to get into a defensive mood to attack a potential predator.

Due to their pronated gripping abilities, opossums are great tree climbers and have the ability of a precision grip with which they are able to carry and move objects in a similar fashion as primates. This advantage can make them a potential danger if threatened.

The first and perhaps most important step in deterring opossums is to remove any and all things that might attract them to your area. Without this step, you can have reoccurring problems with opossums and similar animals, because they will keep coming back. Opossums are natural scavengers and therefore tend to seek out easily accessible food and shelter. As a result, areas with open trash and overly filled canisters are at high risk for opossum exposure. In order to reduce your area to exposure you must:

Trapping opossums effectively can sometimes be difficult, so we always recommend seeking professional help first. With that said, trapping is a guaranteed way to temporarily rid your space of opossums, and if done in conjecture with the other tips listed, it is the fastest way to physically handle the issue.

While the trap is set, be sure to keep all pets inside to avoid the risk of capturing them instead. It is also important to check the trap daily, in case you make a catch. Even more importantly, you must be sure to dispose of the opossum quickly and safely without harming yourself or the animal.

Setting up barriers like tall fences or walls help deter opossums by making their entry onto your property a little more challenging. Opossums are excellent tree climbers, so additional attachments (like barbed wire) at the top of the barrier will add an extra level of security to avoid opossums entering into your space.

Using repellents is important and highly recommended, especially after you have physically removed the scavenger from your space. There are two kinds of repellents that work well for keeping opossums away– natural and chemical repellents.

Our last and final tip is to seek professional help. Using a professional is a guaranteed way to get rid of opossums safely and humanely without any extra hassle. Professionals will often customize a plan for opossum control geared for your specific needs and situation.

In the event you ever realize you have an opossum problem, it is important to never attack, but rather remain vigilant in order to keep other scavengers from entering the area. Remove all attractants, physically remove the opossum by setting a safe trap, and utilize a repellent to keep them away for good.