Opossums, more commonly known as “possums” in the US, are one of the only marsupials found in North America, with the Virginia opossum being the most common species. You may have seen pictures of these furry critters, but what you may not have known is that they have fifty teeth, more than any mammal in North America. With that many teeth, you might wonder what they chow down on.

These rat-faced marsupials are far from picky eaters, and will devour just about anything. They’re omnivores, like us, and will eat both meat and vegetables. As a result, their diets consist of a lot of different types of food. This ranges from fruits, vegetables, and grass all the way to mice and insects. 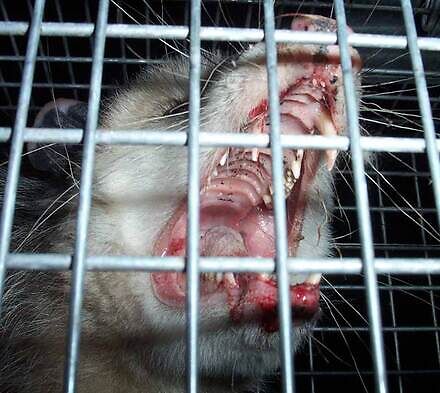 Opossums eat a lot of weird things as part of their diets, chief of which is the snake. You might think that any snake could make short work of the opossum, but this just isn’t the case. These mammals have shown themselves to be immune to most types of snake venom, and they’re more than happy to make a meal out of the slithering reptiles. Scientists have even decided to use the opossum’s natural immunity to make anti-venom to benefit us.

One major aspect of opossum diets is the tick. Opossums love to clean themselves. This has the benefit of both keeping their bodies cool and providing them with a host of fresh meat in the form of ticks. In fact, they eat so many ticks that many say they’re helping cities fight off tick infestations. Studies back this up by saying that a single opossum eats as many as five thousand ticks in a single season.

There are stories about opossums going after people’s chickens, but this is a rare occurrence. Chickens would prove a fearsome opponent for the small opossum, so most wouldn’t take the risk. That said, they have no problem going after eggs, and even use their incredible climbing abilities to aid in this.

Despite their climbing abilities, opossums tend to prefer hunting on the ground. These marsupials have a taste for rot and decay, and prefer to chow down on fruits and vegetables after they’ve already gone off. This makes them great at cleaning up the food most of us consider inedible.

Not only that, but their preference for decay extends beyond just plant life, for not only are they omnivores, but they’re also scavengers. This means that, much like wild hyenas, the opossum has no problem eating animals that are already dead. As a result, you’re likely to find them on the side of the road as they search for roadkill. They even compete with raccoons on occasion, as they dig through garbage and try to get into your trash cans for food.

Yes, they’re omnivores and scavengers, but that’s not the end of things. Opossums are also nocturnal. This means that they do the majority of their activities at night, and sleep during the day instead. This does change slightly during the winter, however, as food becomes scarce and they’re forced to hunt during the day as well. Because of their night-time hunts, these marsupials are excellent at killing and eating the major pests of any large city. Rats, mice, and cockroaches make an excellent meal for these lonesome hunters.

Rats and cockroaches aren’t the only pests opossums get rid of, however, as they’ve been known to feast upon a large assortment of backyard critters that you may not want around. These include slugs, snails, frogs, and the aforementioned snake. By doing so, they can keep your gardens clean and safe.

But how do opossums find their food? Well, these small animals have terrible eyesight and poor hearing to match. As a result, they rely almost exclusively on their incredible sense of smell to find and catch food. In fact, their sense of smell is among one of the strongest in the animal kingdom, and surpasses even that of dogs.

Their sense of smell isn’t the only thing helping them find food. Opossums are surprisingly intelligent and have a great memory. In fact, they can remember which pathways or roads had previously led to a late-night catch, and which ones didn’t. This enables them to return to places where they had the best results.

All in all, opossums know how to eat. They eat constantly, because their bodies don’t have much fat and can’t store energy too well. Thankfully for us, they like to eat what we hate. This includes rotten fruits and vegetables, roadkill, snakes, disease-bearing animals like cockroaches or rats, and even garden pests like slugs. They make the world safer from ticks and Lyme disease, and generally act like nature’s vacuum cleaner.