Most of us are familiar with the opossum – a medium-sized furry marsupial that likes to hang around in trees and around our homes, much to a homeowner’s annoyance. But how many of us really know the complexity of an opossum tail and its many uses?

In this article, we’ll be looking at some of the most interesting and less well-known facts about the opossum tail. 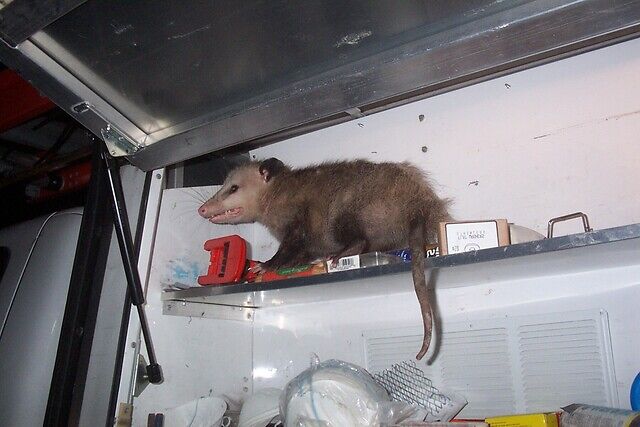 An opossum tail is usually long and prehensile, meaning that it has adapted in time to be able to grasp and latch on to things. An opossum can even hang from its tail for a short period of time.

In short, an opossum tail is generally:

1.  The opossum tail makes for an excellent carrier.

Did you know that the opossum tail is a highly agile part of the animal’s body and that opossums frequently use their tails to carry around things they need? For example, it’s not uncommon to see an opossum carrying sticks or leaves from one place to another. The tail acts, in many ways, as a human hand would.

As we all know, opossums love hanging out in trees, and their tails help get them up there. Often, an opossum’s tail will act pretty much like a fifth limb, which improves their stability when climbing and allows them to go up a tree much faster and more easily.
The tail is very strong and allows the opossum to keep its balance when lying on a branch by wrapping around it. It also improves stability, so that the animal can hop from one branch to another safely.

3.  The opossum can generate certain scents through its tail.

This is something a lot of people don’t know. We tend to associate strange animal smells with skunks, but opossums have this very interesting ability of also generating a special scent with their tails. This scent allows an opossum to mark its territory so that other opossums passing by will know not to make a home there.

Once again, the scent of property comes into play. Not only does their tail allow opossums to release smells that mark their territory, but it also allows female opossums to let out a certain scent that attracts males. It’s a way of letting others know that they are ready to mate.

Opossums frequently use their tail to signal to other opossums that there is a predator nearby and that they should stay away from the area. Predators for opossums include big dogs, raccoons, and coyotes.

In conclusion, an opossum’s tail is a very efficient and necessary part of the animal’s body that allows it to survive.