What Danger Do Opossums Pose to Dogs, Cats, and Other Pets? 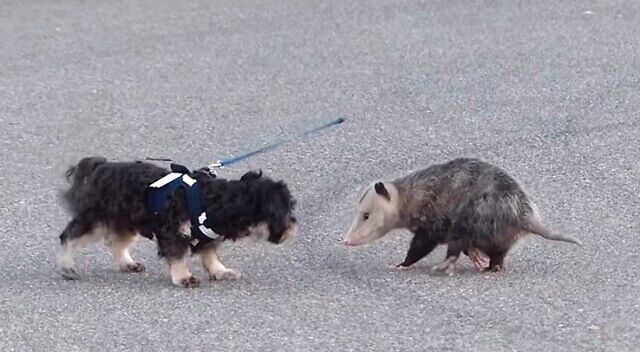 As they say, a dog is the only thing on earth that can love you more than you love yourself. Heartbreaks are an understatement compared to your pet being hurt, especially if it is a dog. An opossum’s razor sharp teeth can cut off a dog’s flesh. Although opossums are not aggressive animals, they can attack a dog. Usually the process goes something like this:

When an opossum miraculously stands up to the attacker and overrides its instinct to play dead, it may look quite scary. Knowing the nature of dogs, they will attack immediately. And it is during this process that the dog may be bitten. In the worst case, if your dog has been bitten, take your dog to the vet as soon as possible before the wound is infected. Precaution is better than cure.

Owning a cat can mean different things to different people. Some want a cat to cuddle and sit on their laps, just like a doll. On the other hand, others are happy to live with a very independent cat that spends most of its time outside. Sigmund Freud once said, “spending time with a cat is never wasted.”  Most people can agree with that.

On the same note, cats and opossum usually live in peace. They generally ignore each other, and at the same time, have some kind of mutual respect for one another. If opossums come into contact with a cat, they often escape and avoid any confrontation. However, opossums do have a hearty appetite for cat food.  That is why stealing food from cats – or even eating together – is a scene that has been frequently observed.

Generally, cats and opossums are not enemies, but neither are they friends. However, if the relationship ever goes south, the two will clash. They both have claws and teeth that are sharp. If your cat happens to get injured in the process, take them to a vet as soon as possible.

Often when people discover an opossum, they are concerned about the danger these creatures might present. While they are mostly aloof and rarely dangerous, opossums can attack if they feel threatened, biting back and posing a threat to house pets.

Any mammal can get rabies; however, the disease is extremely rare in opossums since their body temperature is too low for the virus to thrive. Thus, they seem to have a natural immunity to rabies. However, substantial evidence exists that opossums can transmit the disease equine protozoal myeloencephalitis to horses. This parasitic organism attacks a horse’s nervous system, and the horse may die if not treated. Therefore, horse owners should cover food and grain to reduce the chance of attracting opossums.

Exclusion methods can include:

Opossums are mostly found digging in trashcans and rustling around attics. Signs of their activity can also be seen in lawn damage, in areas where opossums have dug around for grubs and other bugs. If you hear sounds in your garbage cans and think you may have an opossum infestation, seek the help of a professional wildlife removal service.